Big Tech is Harming our Children

Big Tech must be held accountable for how they harm our children. pic.twitter.com/JowKddoyO7

“You’ve broken my trust. Yes, because you’ve failed to promote the battle of ideas and free speech. Yes, because you censor political viewpoints you disagree with. Those polarizing actions matter for democracy. But, do you know what has convinced me Big Tech is a destructive force?  It’s how you’ve abused your power to manipulate and harm our children. Your platforms are my biggest fear as a parent. I’m a mom of three school-aged kids. My husband and I are fighting the Big Tech battles in our household every day. It’s a battle for their development, a battle for their mental health, and ultimately, a battle for their safety. I’ve monitored where your algorithms lead them. It’s frightening. I know I’m not alone.” — Energy and Commerce Committee Republican Leader Cathy McMorris Rodgers 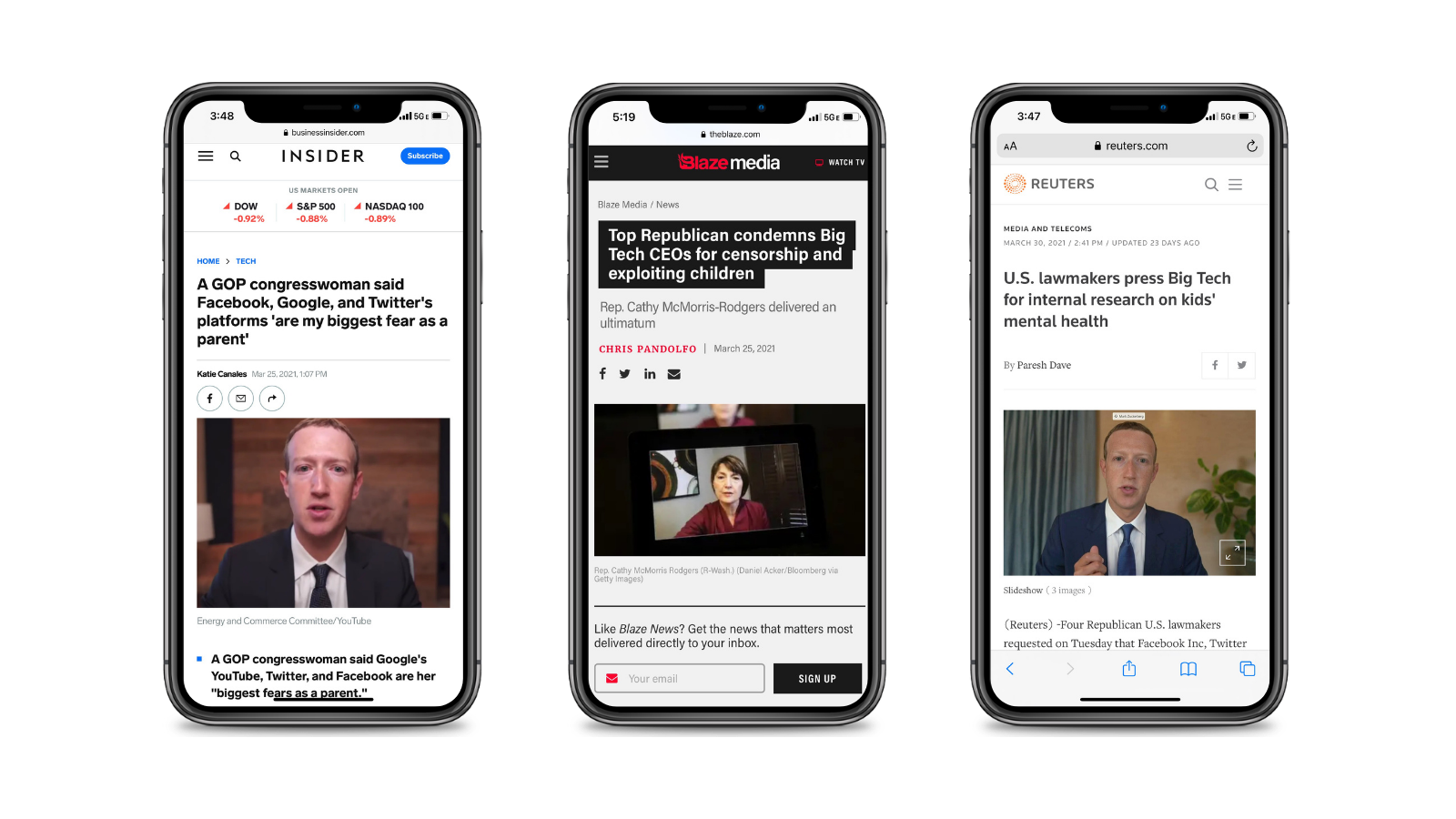 The rise of Big Tech and social media platforms has coincided with an alarming surge in the number of American teens experiencing mental health issues, such as anxiety and depression:

The new realities of COVID-19 have further increased the amount of time our children spend on their devices and online. The beginning of 2021, Energy and Commerce Committee Republicans decided to take action to hold Big Tech accountable. Our children’s mental health and well-being is worth fighting for, and parents will need the necessary tools, information, and transparency from Big Tech in order to have a fair fight.

January 26, 2021: Leader Rodgers shared her Big Tech Accountability Platform in a memo to Committee and House Leadership laying out her aggressive agenda and priorities to hold Big Tech accountable. 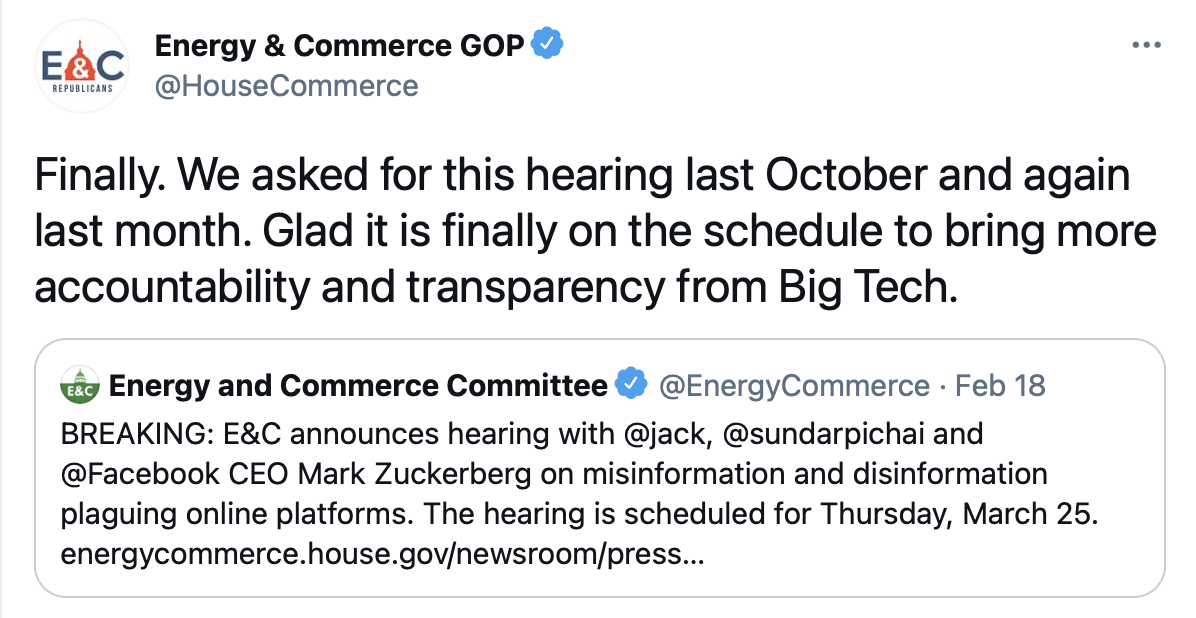 February 18, 2021: The Majority announced Big Tech hearing months after Republicans asked for it.

March 8, 2021: In advance of the House Energy and Commerce Committee hearing with Big Tech CEOs, Republicans on the Committee put out a call to action from the public on their concerns for and trust of Big Tech and received feedback from thousands of Americans across the country. The Public overwhelmingly confirmed they do not trust Big Tech and they want more transparency on how Big Tech runs their platforms.

March 25, 2021: The Energy and Commerce Committee held a hearing with the CEOs of Facebook, Google, and Twitter, on how their platforms are hurting children’s mental health and well-being. The bottom line was that Big Tech has grown too powerful, they have not been responsible stewards of their platforms, which is having harmful consequences for our children.

May 5, 2021: Facebook’s Content Oversight Board announced its decision to uphold the company’s ban on Trump’s account. Several committee leaders, including Cathy McMorris Rodgers, Bob Latta, and Gus Bilirakis issued statements on the Orwellian process that lacked both transparency and accountability.

June 16, 2021: Leader Rodgers circulated a memo with Committee Republican members and staff articulating the third pillar of her Big Tech Accountability Platform, which addresses the relationship Big Tech has with China, in particularly its access to Americans’ personal information. 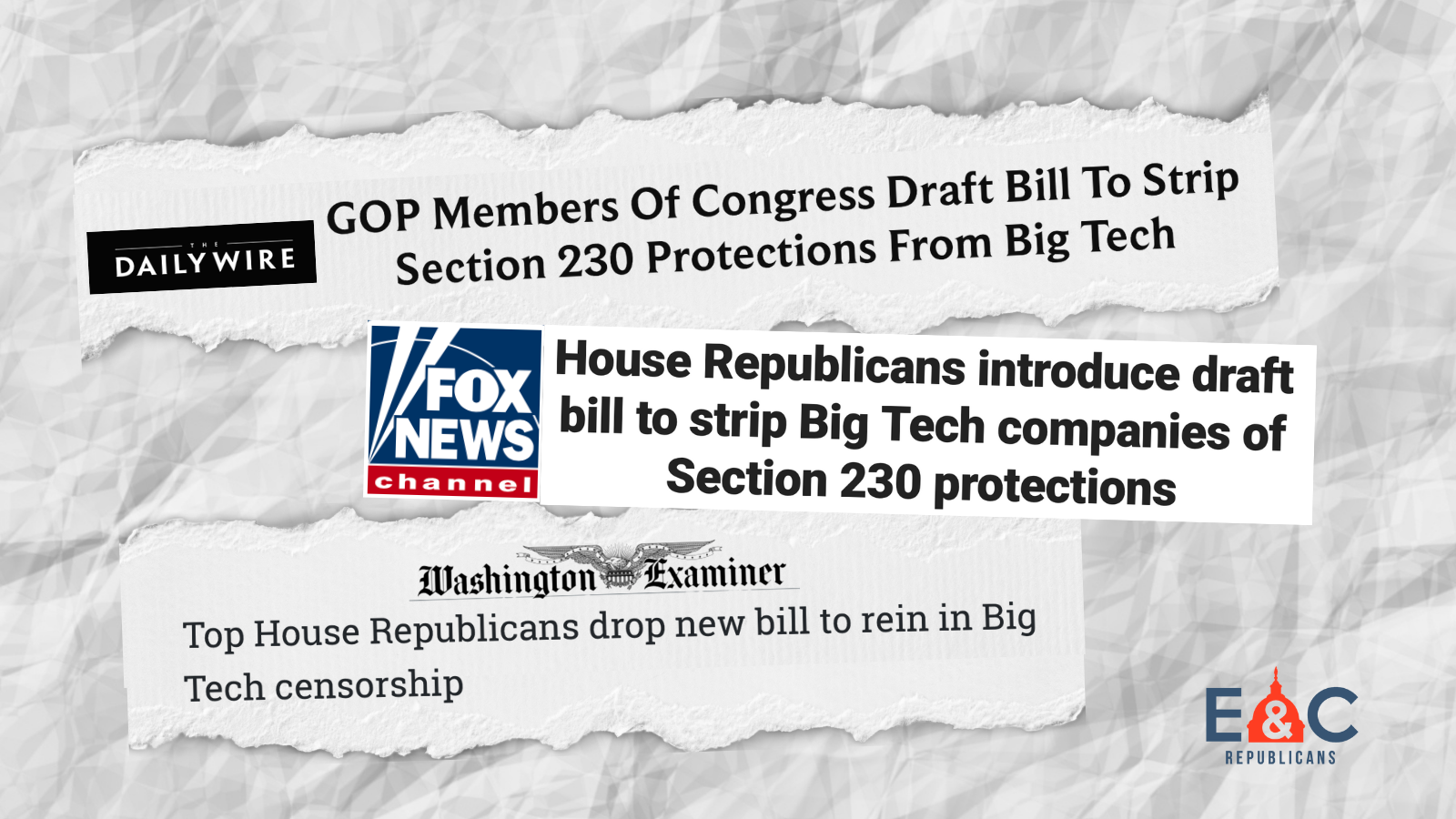 July 23, 2021: In a letter from 189 Republican Members of Congress, including House Energy and Commerce Committee Republican Leader Cathy McMorris Rodgers and House Republican Leadership, urged the Biden Administration to abandon their censorship mission and respond to inquiries regarding their coordination with social media companies to censor Americans.